It’s not even 2016 yet, but the race to replace President Barack Obama has already been interesting, to say the least!

On the Democrat side, there aren’t too many people running, but former Secretary of State Hillary Clinton, the long-awaited heir of the Democrat party, is giving it another try despite the numerous transparency issues she’s dealing with. Sen. Bernie Sanders of Vermont–an open socialist–is running for president. A recent poll shows Sanders leaping ahead of Clinton in New Hampshire, home of the nation’s first presidential primary. Not only is he a socialist, but he released his own folk song album in 1987! You can listen to a snippet of it. And let’s not forget there are two others of interest: former Maryland Gov. Martin O’Malley and current Vice President Joe Biden. O’Malley is not well-known. Biden has not officially launched a campaign yet, but is said to be considering getting into the race. We all know Biden’s tendency’s to speak his mind and how entertaining he can be!

And that’s just the Democrats! Now to the Republicans…

First off, the Republicans have 2,371 candidates running for president. Well, not really that many–but close! Seventeen Republicans are seeking their party’s nomination for president. Former Florida Gov. Jeb Bush is one of them. While the word “entertaining” doesn’t necessarily come to my mind when I think of him, a close relative of his does–his mom, former First Lady Barbara Bush! Earlier this week on NBC’s Today, Barbara Bush’s granddaughter Jenna Bush Hager announced she would be going on maternity leave this week to prepare for giving birth to her second daughter. As a surprise, Jenna’s mom, former First Lady Laura Bush and her grandmother Barbara called into the show to wish her well. During the live segment, Today’s Savannah Guthrie said, “One thing we know the Bush ladies know how to do is raise beautiful little girls.” Barbara Bush quickly responded with “Wait a minute! We’re not bad on boys!”

Then there’s retired neurosurgeon Dr. Ben Carson. You may remember Carson from his bold speech at the National Prayer Breakfast in 2013 as he spoke just feet away from President Obama. There’s also a book and a movie about Dr. Carson called “Gifted Hands: The Ben Carson Story,” that chronicles his struggles in childhood and his eventual role as a life-saving pediatric neurosurgeon.

Former Texas Gov. Rick Perry is running again. I would yawn except for the fact that he challenged another Republican presidential candidate to a pullup contest–yes pullups. You know, that exercise you do when you find a bar that’s above your head and pull up on it? 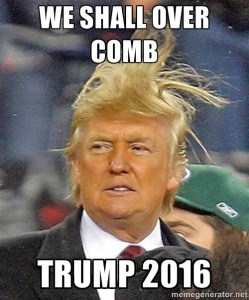 So, I’ve been saving the best for last. The Donald. The Hair. The Legend. He’s the other candidate that Gov. Perry challenged to a pullup contest. In the presidential campaign alone, Donald Trump has already provided loads of entertainment and provocative statements for the media to discuss. And what’s with that hair?

I once learned how influential Donald Trump is. I don’t remember too many specifics, but several years ago, severe weather was occurring in parts of the NBC 26 viewing area during an episode of “The Celebrity Apprentice.” Because of the severe weather, I had to cut-in to the show to update our viewers on the storms. Afterwards, I got numerous complaints from viewers who weren’t in the path of the stormy weather. Now, this somewhat obnoxious billionaire is running for president, but for what reason? Is he really outraged at the state of our country? Or is he just seeking more time in the spotlight? Some have even opined that he’s a Clinton pawn to derail the Republicans’ ambitions to take back the White House since he’s been friends with the Clintons for so many years.

However it turns out, it looks like we could be in for an entertaining campaign. Hopefully, it will become a serious discussion of the issues, allowing Americans to have access to all of the knowledge they need to make the best choice. I’m not counting on that, though.

One thought on “Could this be the Most Entertaining Presidential Race Ever?”